With the release event for Apple’s newest iPhone model going on, quite literally, as I type, it comes as no surprise that scammers are exploiting the vast anticipation for the iPhone 5.

In fact, so wide is the interest in Apple’s unreleased products that among the first iPhone 5 mass spam campaigns is one attempting to push accessories for the device rather than the more ambitious route of offering the recipients a chance at acquiring the iPhone 5.

According to SecureList’s Maria Namestnikova, a Chinese company registered a mass email campaign featuring a brief apology saying, “I am sorry for this email if it gives inconvenience to you,” followed by a shameless attempt at hawking “iPhone 5 Protector Cases.”

It is unclear whether these cases exist. I wouldn’t bet money on it, but even in the unlikely event that the cases do exist, they would have a hard time fitting on an iPhone that the case’s creators had yet to see. 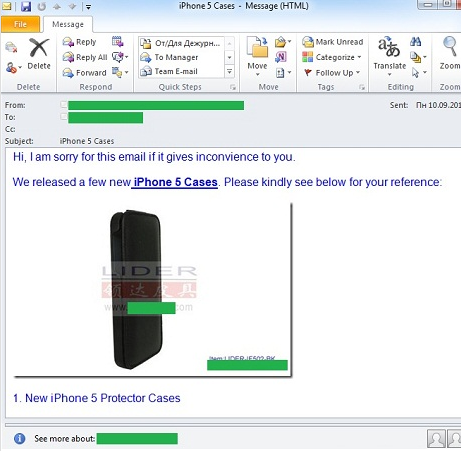