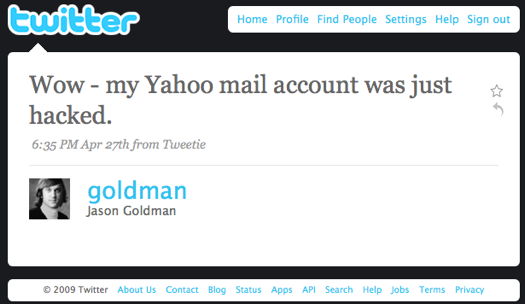 Twitter co-founder Biz Stone says the company “takes security very seriously” but the details behind the micro-blogging site’s recent hack shows that Twitter is light years away from having the most basic security controls in place.

Here’s the French hacker describing how he broke into Twitter’s admin interface:

And here’s another doozy:

As it turns out, the Twitter admin who had his Yahoo mail hijacked via the secret question was Jason Goldman, who tweeted about it several times.

This isn’t the first time a stray Twitter admin’s password turned into a security embarrassment and it makes one wonder if the company has given any thought to securing the privacy (and, sometimes, anonymity) of its growing user base.

Graham Cluley has it right:

It seems to me that Twitter’s internal security could be improved if staff were forced to log in using authentication tokens that provide a randomly generated key upon login, meaning that even if a staffer’s username and password is compromised hackers would not be able to gain access.

Hopefully, the plans for a Twitter security team go further than just securing the code and eliminating XSS vulnerabilities.

Twitter needs a top-down rethink of the way security is being handled and a genuine, transparent effort at hack-proofing the service.