This Simple Message Can Crash Skype Badly and Forces Re-Installation 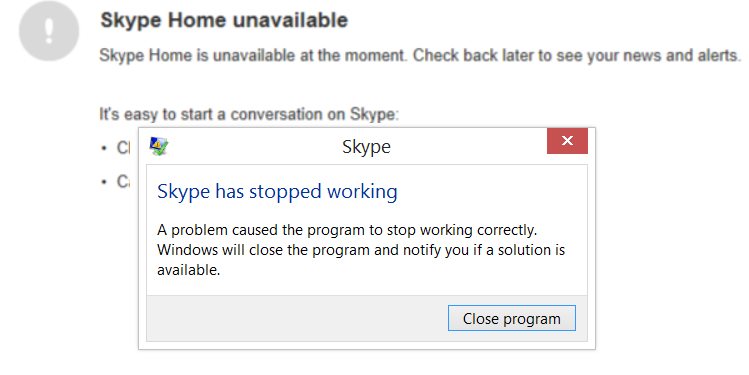 Just last week iPhone and iPad users were dealing with an iOS text bug that caused the app to crash and iPhones to reboot, now a similar bug has been found that takes out Skype — the popular video chat and messaging service.

Yes, Microsoft-owned Skype VoIP client is also affected by a bug that crashes almost every single version of the Skype client on both desktops and mobile phones with a single message containing just eight characters.

The impacts are so bad that it requires a re-install in order to get things working hitch-free again.

If a user receives a message during a conversation on Skype containing the text string "http://:" (without the quotes), it reportedly crashes Skype when running on Windows, Android, or iOS operating system, according to reports on Skype forums.

However, Skype app for Mac and the modern touch-optimized version of Skype app for Windows 8.1 are reportedly unaffected by the bug.

The nasty bug was first reported by a user, who goes by the handle Giperion, who noted that sending "http://:" would crash the Skype app endlessly for the sender of the message containing the specific text string, as well as the receiver.

On the forums, a spokesperson for Skype has confirmed the existence of the bug and written that they are "aware of the problem and are working to provide a resolution."

VentureBeat tested out the bug on Skype for Android, Windows, and iOS and confirmed that it works, saying, "Skype for Android and iOS both fall into endless crash loops."

The bug is actually more annoying than the iOS crash bug, as there is no simple workaround to the problem like in the case of iOS bug where you have to just another message to cancel out the initial strand.

Deleting your chat history also won't work, as Skype re-downloads this data from the cloud every time you start the app. Thus, it will spot the troublesome string of characters and crashes the app all again.

Until now, there is just one best workaround in forums to overcome the problem is to ask the people who sent you the text message to delete it, and then to install an older version of Skype, which is bug-free, instead the new version.

Hopefully, the company will release a full fix for the bug quicker than Apple.