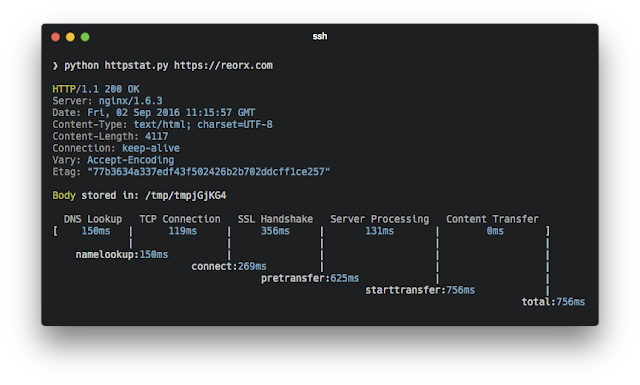 httpstat visualizes curl(1) statistics in a way of beauty and clarity.

It is a single file Python script that has no dependency and is compatible with Python 3 .

Installation
There are three ways to get httpstat :

If installed through pip or brew, you can use httpstat as a command:

cURL Options
Because httpstat is a wrapper of cURL, you can pass any cURL supported option after the url (except for -w , -D , -o , -s , -S which are already used by httpstat ):

Environment Variables
httpstat has a bunch of environment variables to control its behavior. Here are some usage demos, you can also run httpstat --help to see full explanation.

Set to true to see debugging logs. Default is false

For convenience, you can export these environments in your .zshrc or .bashrc , example:

Related Projects
Here are some implementations in various languages:

Some code blocks in httpstat are copied from other projects of mine, have a look: