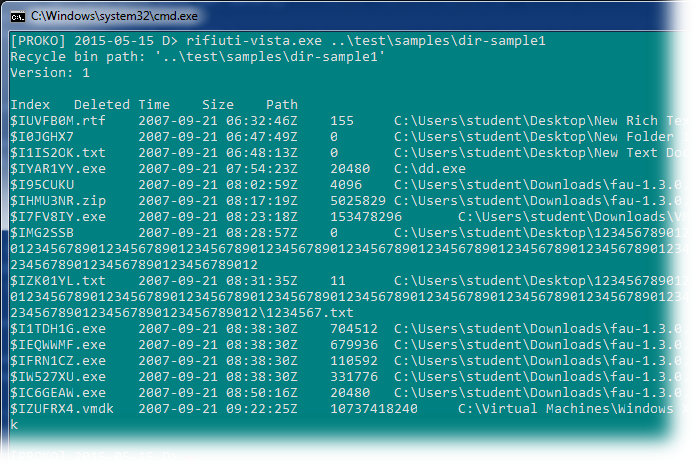 For those interested in what it does, and what functionality it provides, please check out official site for more info. Latest features and changes can be found in NEWS file .

Usage
rifiuti2 is designed to be portable, and runs on command line environment. Depending on relevant Windows recycle bin format, there are 2 binaries to choose from (most users would want first one):
Program | Recycle bin from OS | Purpose
---|---|---
rifiuti-vista | Vista – Win10 | Scans \$Recycle.bin style folder
rifiuti | Win95 – XP/2003 | Reads INFO or INFO2 file in \RECYCLED or \RECYCLER folder

> Scan for index files under \case\S-1-2-3\ , adjust all deletion time for local time zone, and write XML output to result.xml

> Assume INFO2 file is generated from Japanese Windows (codepage 932), and display each field line by line, instead of separated by tab

Supported platform
It has been tested on Linux, Windows 7 and FreeBSD. Some testing on big endian platforms are done with Qemu emulator. More compatibility fix for other architectures welcome.

Windows
Windows binaries are officially provided on Github release page .
Note that 0.6.1 version is the last version that can run on Windows XP and 2003; upcoming versions would require Vista or above.