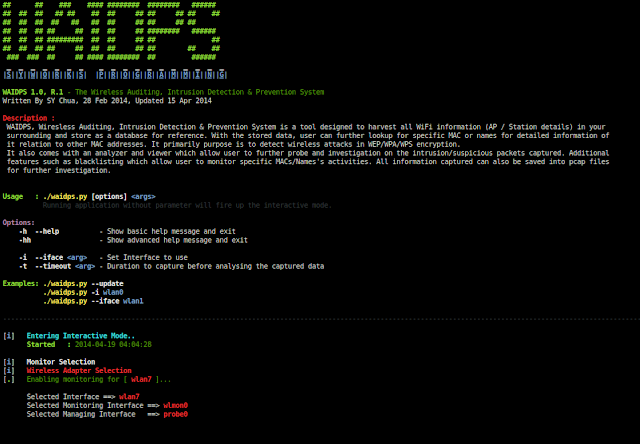 WAIDPS is an open source wireless swissknife written in Python and work on Linux environment. This is a multipurpose tools designed for audit (penetration testing) networks, detect wireless intrusion (WEP/WPA/WPS attacks) and also intrusion prevention (stopping station from associating to access point). Apart from these, it will harvest all WiFi information in the surrounding and store in databases. This will be useful when it comes to auditing a network if the access point is ‘MAC filtered’ or ‘hidden SSID’ and there isn’t any existing client at that moment.

WAIDS may be useful to penetration testers, wireless trainers, law enforcement agencies and those who is interested to know more about wireless auditing and protection. The primarily purpose for this script is to detect intrusion. Once wireless detect is found, it display on screen and also log to file on the attack. Additional features are added to current script where previous WIDS does not have are :

At present, WAIDS is able to detect the following wireless attacks and will subsequently add other detection found in the previous WIDS.

The whole structure of the Wireless Auditing, Intrusion Detection & Prevention System will comprise of

Other additional item include analyzing of packets, display of captured dump, display network barchart and much more.

No special equipment is required to use this script as long as you have the following :