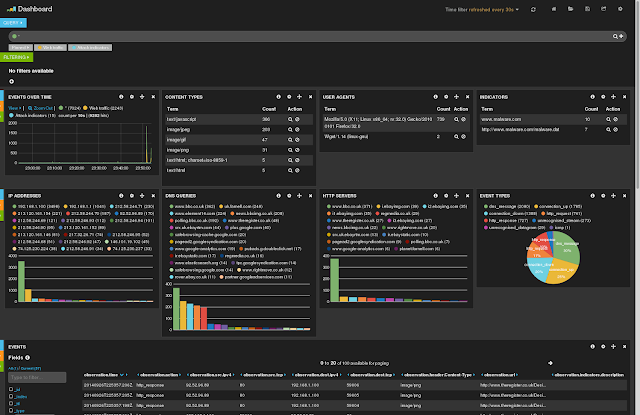 Cyberprobe is a distributed software architecture for monitoring of networks against attack. It consists of two components: cyberprobe, which collects data packets and forwards them over a network in standard streaming protocols; and cybermon which decodes protocols, and invokes user-defined logic on the decoded data.

Cyberprobe can be integrated with snort so that the captured data corresponds with an attackers IP address as detected by snort.

Cybermon uses a LUA configuration file to describe what to do with the decoded information, providing great flexibility. Cybermon also supports a couple of packet injection techniques, allowing you to respond to attacks by resetting connections, or forging DNS responses.

The Cyberprobe project is an open-source distributed architecture for real-time monitoring of networks against attack. The software consists of two components:

These components can be used together or separately. For a simple configuration, they can be run on the same host, for more complex environments, a number of probes can feed a single monitor. For more detail, and to see where we are going, read the architecture page.

The probe, cyberprobe has the following features:

The monitor tool, cybermon has the following features:

The cybermon software includes some support for STIX as a threat indicator specification, and can create alerts on the presence of threats on the network.
The code is targeted at the Linux platform, although it is generic enough to be applicable to other UN*X-like platforms.

The easiest way to learn about the software is to follow our Quick Start tutorial .